2020 In Review And The Upcoming Election

2020 In Review And The Upcoming Election

It has undoubtedly been quite an eventful year, but 2020 seems like it would not be complete without a Presidential election. Years from now, if someone looked up the headline-grabbing events from 2020 they
would most certainly read about the COVID-19 pandemic that has caused hundreds of thousands of deaths worldwide and halted one of the greatest U.S. economies in its tracks. College and professional sports were
forced to postpone or cancel their seasons due to the spreading risk of the virus. The Dow Jones Industrial Average plunged 7.79%, 9.99%, and 12.93% on March 9th, March 12th, and March 16th, respectively due to the rising fear of COVID-19. President Trump ultimately contracted the virus himself and survived after a brief hospital stint.

They might read about the House of Representatives voting to send its impeachment articles against President Trump to the Senate, who eventually voted to acquit the President. They may also come across
the news of Prince Harry and his wife Meghan Markle announcing their plans to “step back” from duties as members of the British royal family, or about a helicopter crash in California that took the lives of Kobe Bryant, his daughter, and seven others.

Harvey Weinstein was sentenced to 23 years in prison, serving some justice to his “Me Too” victims. Recordbreaking wildfires occurred in Australia and in the United States from California to Washington State during the year, which also saw a record number of hurricanes in the Atlantic. Supreme Court Justice Ruth Bader Ginsburg died at the age of 87 sparking the current debate between Democrats and Republicans on whether Trump should nominate a new Supreme Court Justice this close to an election.

With two months to go in the year, not to mention the upcoming election that will most likely be surrounded in controversy due to mail-in voting and a possible delay in the election results, the headline-making events don’t look like they are going to slow down anytime soon.

With the uncertainty surrounding the results of the election, many investors are worrying what will happen to their money depending on who wins. As of this writing, Biden has emerged as the favorite over Trump, in both the betting markets and polls. We all know what happened last time Trump was the underdog though, so investors should prepare for both scenarios and try to remove any bias they might have, which is what the investment team at Greystone does. Certain industries should perform better depending on the outcome of the election, and we are prepared to make investment decisions no matter what that outcome is.

Both Trump and Biden want to spend big in this area. The only question is what segments of the economy will benefit the most? Trump has been eyeing a $1 trillion infrastructure package that would distribute most funds into roads, bridges and mass transit via the Department of Transportation. However, a portion of the money would go to rural broadband and 5G infrastructure. Biden looks to make a $2 trillion investment in his first term. Roads and bridges are a focus for Biden, but he also is looking at improving green spaces, water systems, electricity grids, and broadband. Biden will have more of an emphasis on fighting any impacts of climate change and will look to modernize the economy by spending more

There is a fundamental difference between the two parties on how the country should view climate change. Trump would continue to deregulate the energy industry, which would encourage fossil fuel production.
Biden wants to become carbon-neutral by 2035, so expect more regulations on carbon emissions, fracking, and coal. Additionally, if the Democrats were to sweep Congress, a potential Green New Deal could be
extremely negative for traditional oil companies

Perhaps the biggest area of uncertainty is healthcare. After living through the pandemic, a lot of politicians, voters, and investors are rethinking our healthcare system once again. Biden has broken from the ideas of Bernie Sanders and Medicare for all, preferring a Medicare-like option for health plans. Trump has voiced his issues with high drug prices and encouraged telehealth. He has also talked about overhauling the ACA, but in the middle of a pandemic, that seems impossible

We know exactly what we are getting with taxation as Republicans want taxes lower and Democrats want them higher. If Trump wins, taxes will remain low across the board. Additionally, Trump wants to cut taxes 10% for the middle class by lowering the marginal tax rate for individuals making over $40,125 and married couples over $80,250. If Biden wins, taxes for corporations go up and some form of a wealth tax could be enacted. Biden has said that he would like to raise the top marginal tax rate of 39.6% for those making over $400,000.

Even though certain sectors and industries may benefit more depending on who wins the election, the market in general has historically performed similarly no matter which political party is in office, at least if you look at the full 4-year term. The chart below shows the average returns for all 2- and 4-year periods following each of the scenarios presented. As you can see, while there is some significant variation in returns in the following 2 years, the returns are fairly similar in the following 4 years. 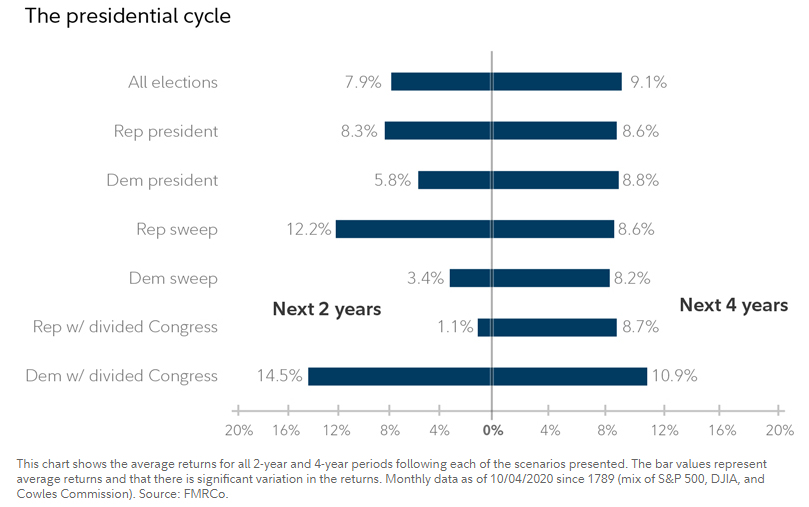 It’s likely that mid-term elections play a role in creating a contrast between the 2- and 4-year returns. The political pendulum is always swinging it seems, sometimes quickly and other times slowly. While some mid-term elections reinforce a president’s mandate, others cancel them out, mitigating whatever market momentum (positive or negative) was underway in the first 2 years. 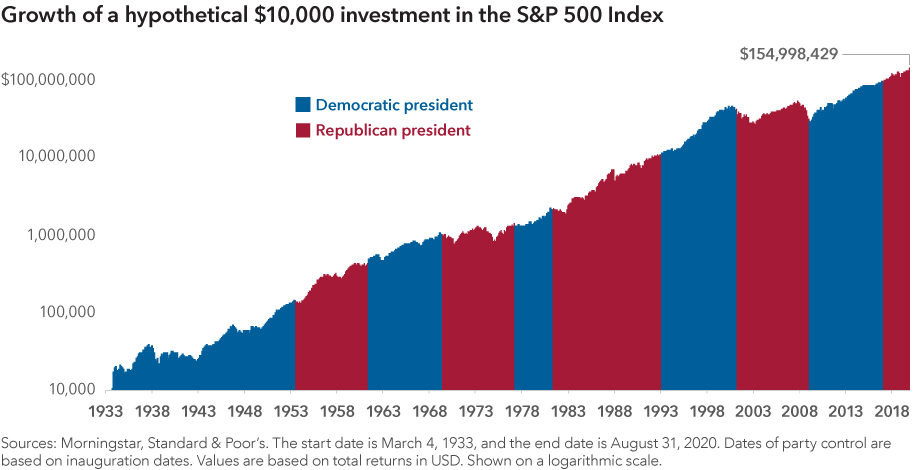 This year’s election will almost certainly end in either a unified government under a blue wave or a split Congress, which could happen with either a Trump or Biden victory. Voters may have a strong preference, but investors should take comfort that both scenarios have historically produced strong equity returns.

A different way of looking at how the market has performed under past presidencies is by looking at the following chart.

A simple stock market metric has correctly predicted the winner in 20 of the last 23 presidential elections since 1936. If the S&P 500 Index is up in the three months prior to Election Day, the incumbent party usually wins. If markets are down during that period, the opposing party typically claims victory. Why is this? It’s because equities tend to look ahead and “price in” uncertainty — including that caused by an upcoming election. When the stock market and the economy are strong, there is usually less motivation for a change in leadership. In those years, stocks may not need to discount the uncertainty, which often allows stocks to continue rising, further bolstering the incumbent’s chance of reelection. 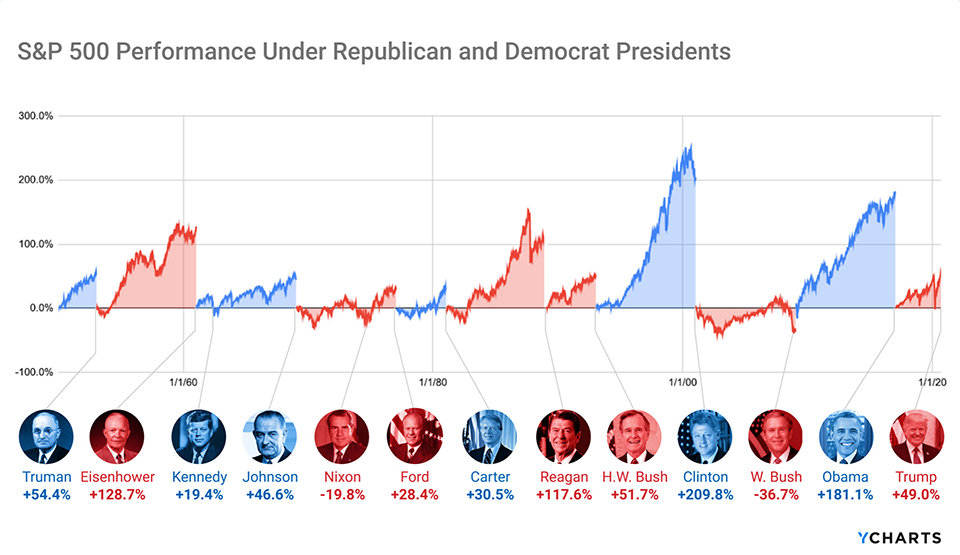 As of this writing (October 26th) the S&P 500 is up 4% since August 3rd (three months prior to Election Day). In more normal times that would favor the incumbent, but today’s shaky economy offers a different story. Since 1912, only once has a president been reelected if he oversaw a recession within two years of the election. While this trend may be interesting, investors shouldn’t use it as an excuse to try
to time markets. Historically, whether the incumbent wins or loses, election volatility has usually been short-lived and quickly given way to upward moving markets.

The most important takeaway is that the party occupying the White House is just one of many variables that can impact your investments. For example, the Dot-com bubble bursting in 2001 and the 2008
Financial Crisis greatly impacted the markets beyond the control of the Presidents Bush and Obama, respectively – not to mention the current pandemic with Trump. While elections may create some shortterm
uncertainty in the market, long-term investing goals and risk tolerances should always be the most important factors in your investment decision making.

The investment team at Greystone isn’t going to try to predict who is going to win the election. We are going to be prudent and prepared to be in the best position no matter what happens in November. If
there is chaos around the voting accuracy or a contested election occurs, there is a very good chance the market will pull back briefly due to this uncertainty. If this does in fact happen, then we want to
have less exposure to market risk to minimize the damage. We have gradually been raising cash in our client’s accounts because of this possibility – as well as to take advantage of potential buy opportunities
that present themselves depending on which candidate wins the election.

Please speak with your Wealth Advisor if you have any questions or want to review your portfolio to be sure that you are in the most appropriate strategy to help you accomplish your long-term goals. 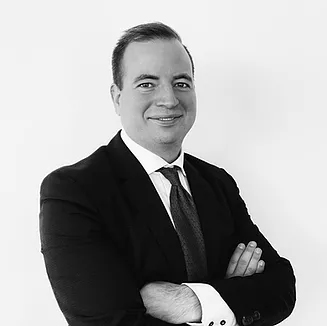 The Importance of Investing as a Young Professi...